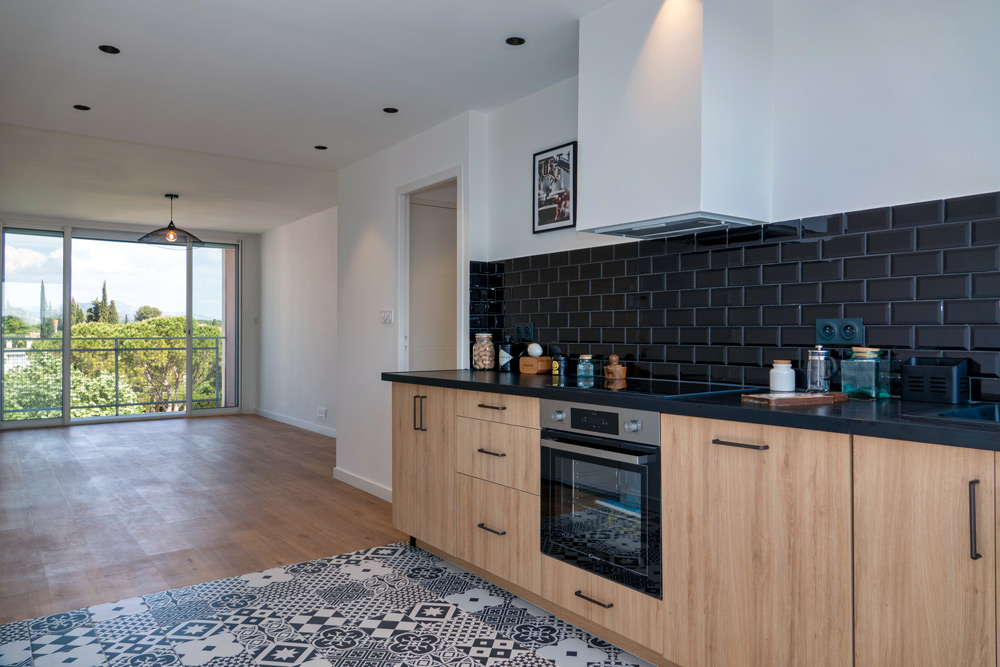 In the residential and shopping area of Beaumont, Casaloft offers you this bright 3 room flat (East/West), not overlooked, located on the 4th and last floor (without lift) of a small, well-kept residence. Recently renovated, it has a large living room with a living room opening onto a balcony, a fully equipped kitchen (dishwasher, oven, induction hob, hood), and an adjoining utility room. The night area offers two beautiful bedrooms (12 m² and 11 m²) with cupboards, a shower room with Italian shower, a separate toilet. Underfloor heating, parquet flooring, cement tiles, double glazing and electric roller shutters complete the picture. You will appreciate the absolute calm, the unobstructed view on both sides of the vegetation and the hills, as well as the immediate proximity of shops, schools, public transport (bus and Metro) and the L2. This cocoon is to be visited without delay…

Unlike the Saint-Barnabé and Saint-Julien districts, between which it is located, Beaumont is relatively recent, and is not generally recognised as one of Marseille’s 111 districts. Attached to Saint-Julien, Beaumont is nevertheless a nugget, a quiet, suburban neighbourhood with numerous villas and small residences that has preserved a rare quality of life. It is considered the main Armenian district of Marseille and is home to many families descended from Armenians who fled the genocide of 1915.
The district of Saint-Julien takes its name from the old village-parish around which it developed. This village with its narrow streets is nestled around its church. It expanded to the north, around the Boulevard de la Comtesse, and along the old road leading from the centre of Marseille to Allauch via Saint-Barnabé and the Trois-Lucs. There are still some beautiful middle-class properties and some green spaces, which make it a rather residential area. Fernandel and a master of contemporary painting, Ambroggiani, have contributed to the fame of this district, where the Marseilles bourgeoisie liked to build their bastides. Saint Julien has preserved, through the generations, a rare quality of life. Joggers and families alike will appreciate the walks along the Canal de Marseille and its panoramic views…

Estimated annual energy costs for standard use: between 720 and 1020 € per year.
Average energy prices indexed to 1 January 2021 (including subscription).